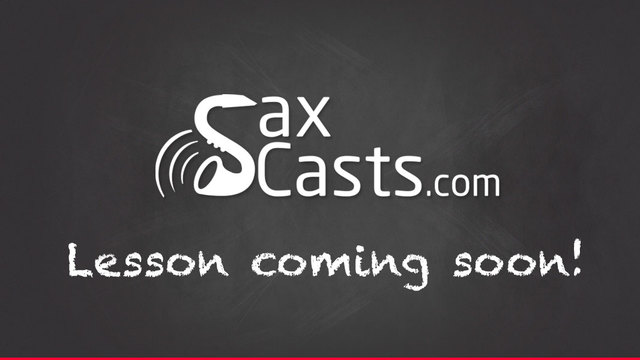 In this Online Jazz Sax lesson we're going to cover Seventh chords. Dan will teach you how to create and identify the chords that synonymous with that "jazz" sound. If you don't know seventh chords then you are heavily missing out on a tonal pallet that is used across all genres of music.

A plain chord can be created from a root note, 3rd and 5th. The process of creating a seventh is simply just to add a 7th to the top of a standard triad. We can think of the Seventh Chords as a Triad plus the interval of a seventh between the root note and the 7th.

Using notes from the C major scale we can create four different types of 7th. Dominant 7th, Major 7th, Minor 7th and Half Diminished 7th. Each of these chords have various uses and they are often found in similar positions. For the sake of understanding seventh chords for now, let’s imagine each seventh chord gives us a different type of tension.

The dominant seventh chords are often described as “cool” or “bluesy” and generally move back to the tonic and is built from Chord V in a major key. For this reason many songs end with Chord V moving to Chord I (commonly called a Perfect Cadence in classical harmony). The seventh in this chord offers a lot of tension and feels like it wants to move down a semitone. The chord also contains the interval of a Tritone (Augmented 4th) which creates an extra need for resolution. In C major, the Dominant 7th chord is G (GBDF) the Seventh (F) wants to fall down a semitone to E, which is the 3rd of C Major (chord I, CEG) This gives a very strong sounding ending, needless to say you should aim for notes of the dominant 7th chord when approaching the end of your solo. This chord is often used as a “Pivot” when moving to a different key.

This chord is used to spice up standard triads, especially in Jazz. The chord is often used in film when, for example, the main character drifts off into a dream sequence. Choosing to add a major 7th to a standard major triad will have this effect and gives you food for thought when it comes to note choices during improvisation. This is built on chords I and chords IV of a Major Scale

The minor 7th has a very cool sound to it and is built from chords ii (DFAC), iii (EGBD) and vi (ACEG) in a major key. You should use it when you want a chord to sound particularly jazzy without too much tension. The most common place for a minor 7th chord to be used is before Chord V. You’ll often hear a minor 7th chord used in the bar before a dominant 7th chord.

In a major key this chord is built from the 7th degree of the major scale (Chord vii is BDFA in C Major) and once again is mostly used as a precursor to Chord I (Authentic (Finished) Cadence). It is quite a tense sounding chord but has the cool/bluesy sound created by the Minor 7th between the root and 7th note (B->A). It is worth noting that the difference between half diminished chords and fully diminished chords is the symmetry. Diminished 7th’s are creating by stacking minor 3rd’s on top of each other. The half diminished chord has 2 stacked minor 3rds and a major 3rd above that.

There are more Seventh Chords than the ones mentioned but these are the most commonly found chords and are therefore worth getting to grips with initially.